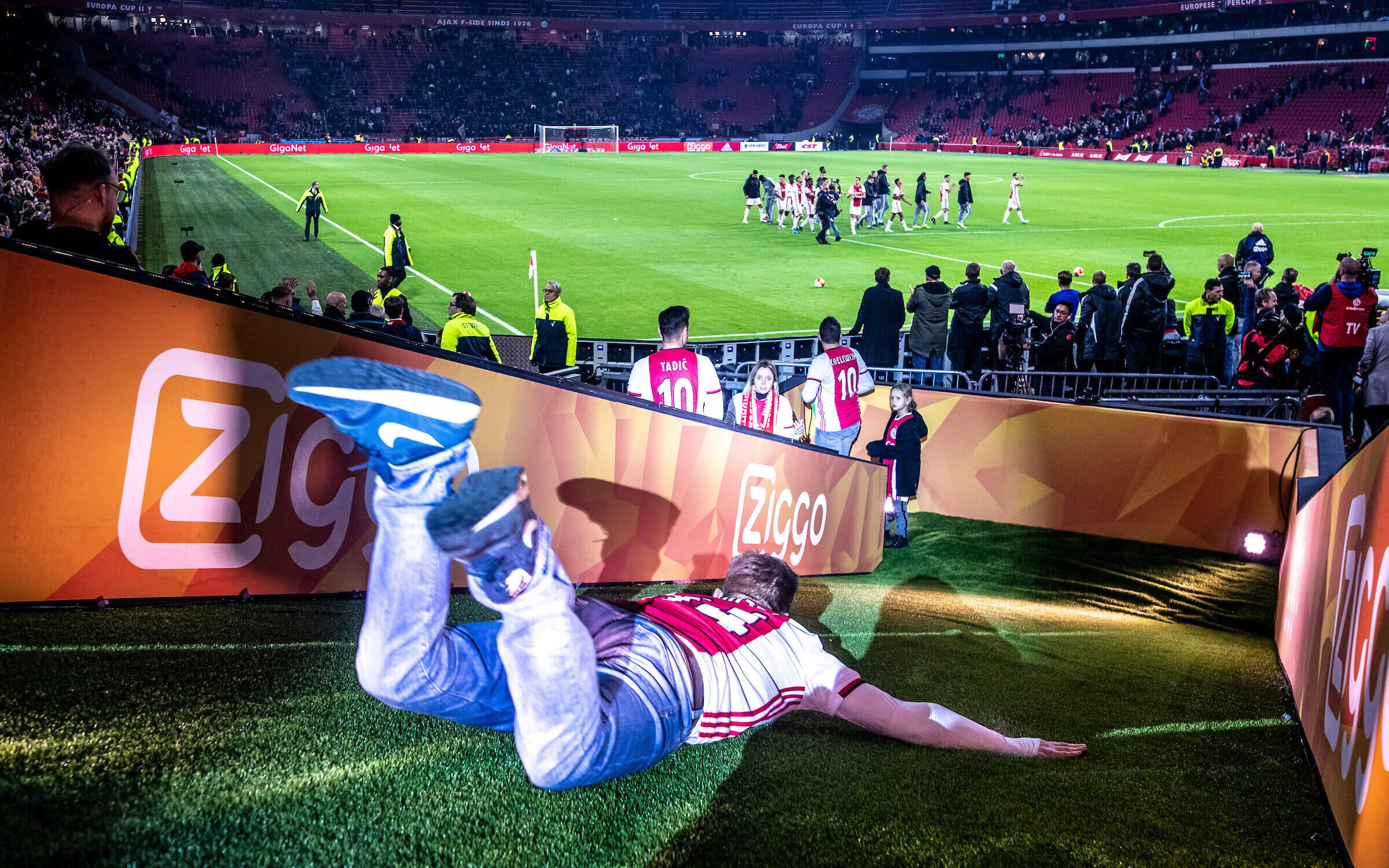 The game of the season in Dutch Premier Division (Eredivisie) football is undoubtedly the match between Ajax and Feyenoord. As the main Ajax sponsor, entertainment provider Ziggo is sitting on a potential gold mine but has to work hard to put De Klassieker (The Classic) on the map each year. As FOX Sports owns the television broadcasting rights for all Dutch Eredivisie matches, Ziggo has to drum up media attention through noteworthy activation campaigns. The inspiration for this year’s activation came from Marc Overmars’ belly slide when Ajax beat Juventus last season.

Marc Overmars epitomized the emotions felt by supporters of the winning team in the Champions League. His belly slide, performed in a business suit, was an expression of pure joy and victory. Most supporters are not in a position to show their elation in quite the same way, as the average space in a stadium per supporter is about 5 square feet. Glasnost and Kumpany devised an activation that would change that for the first time in football history.

The activation offered a twelve-person team of supporters the chance to celebrate the highlights of the game like players do on the field: by performing a belly slide. A lottery gave fans the chance to win access to a premium spot in the Johan Cruijff ArenA where a sloping belly slide (buikschuifbaan) with artificial grass was constructed for the game on 27 October 2019.

‘Can you outperform Overmars’?

The campaign started off with an enigmatic ad in the national newspaper de Telegraaf: ‘Can you outperform Overmars? Signed: Ajax & Ziggo’. This, of course, was fodder for the social media and football rumour mills. Was Marc Overmars quitting? Were fans offered ‘a day in the life of’? After two days of media speculation, the activation was revealed in a unique video that aired on the Ajax and Ziggo social media channels. It showed Edwin van der Sar, General Manager of Ajax, hinting at a (belly) slide during a call with Marc Overmars. The idiosyncratic and culturally diverse video went viral in no time and was shared on social media and by national media outlets.  The Call to Action: register now to win a spot on the belly slide!

Sometime after the first video, a reminder was issued for fans to register for the lottery. The reminder came in the form of a video in which three foreign Ajax players said the word buikschuifbaan, a tough one to pronounce if you are not a Dutch native speaker. This little piece of football comedy, which spread like wildfire through national media outlets and social media channels, was followed by the last call to action from ex Ajax-player Andy van der Meyde. Over 35,000 supporters registered for this unique football-fan experience.

The activation campaign gave Ziggo a headstart for De Klassieker and was a PR victory. The game itself ended in a resounding four-nil win for Ajax, providing the lucky winners with four cheering, sliding and exciting runs down the buikschuifbaan. The event became instant football history and was shared and mentioned on radio and TV, social media, in print and online. Supporters also shared their own comments, memes and photos. Following the third goal, Ajax left-back Nico Tagliafico, even gestured to the eleven euphoric fans to use the buikschuifbaan. All the excitement kept Ziggo in the public eye during the game. The activation resulted in a media value of €480,000, over 81 million impressions and a rise in brand preference and consideration.

During this match, Ziggo once again turned customers into fans–and fans into customers.