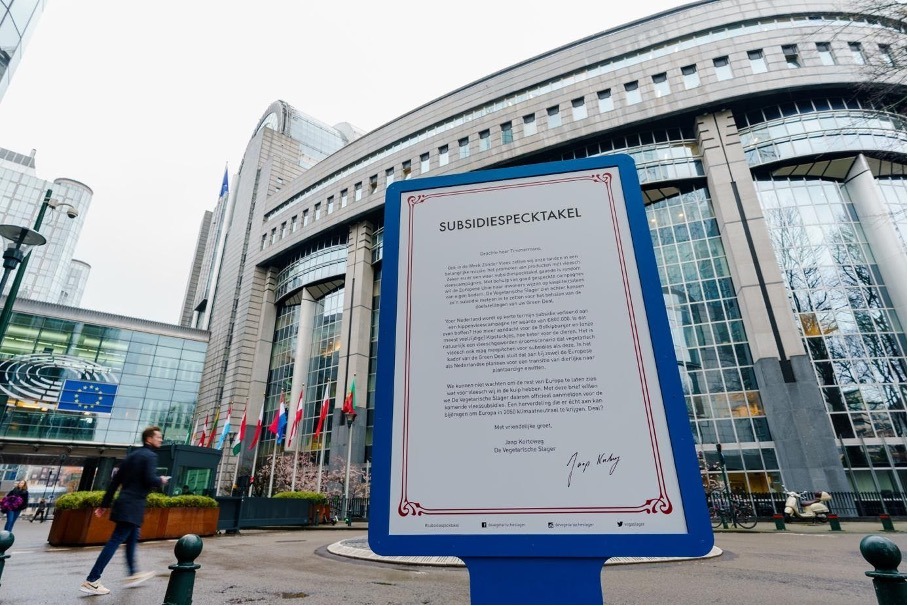 Whenever the opportunity presents itself to link marketing activities to current events, we–like The Vegetarian Butcher–feel it should never be ignored. So, when Dutch national daily De Volkskrant published an article about the tens of millions of euros spent each year by the European Union on subsidies for the promotion of meat consumption, we were quick to act. The Vegetarian Butcher states that it is more than a bit paradoxical to be adapting laws and regulations to fight the climate crisis on the one hand while stimulating meat consumption–and the very polluting industry that goes with it–on the other. We decided to make some noise!

For years, The Vegetarian Butcher has been developing and promoting meat replacement products in a bid to end animal suffering and reverse climate change. The article in De Volkskrant coincided with the National Week without Meat in the Netherlands; a perfect occasion to highlight the inconsistencies in the European agricultural subsidies policy. As The Vegetarian Butcher is known for play-on-words product names such as Unbelievaballs and What the cluck, Glasnost launched the creative campaign #subsidiespecktakel (subsidy spectacle). The campaign saw The Vegetarian Butcher apply for a European meat marketing subsidy in order to promote the consumption of vegetarian meat.

The #subsidyspecktakel campaign definitely proved that news can be created. Together with The Vegetarian Butcher we rolled out our plans in a mere week’s time and drew national attention to the specktacle. We purposefully chose to launch shortly before the start of the National Week without Meat. The Vegetarian Butcher reached out to their followers on social media, asking them if they had read the article and how they would use a subsidy for the promotion of meatless meat. Next, The Vegetarian Butcher sent out a letter for publication in the Saturday edition of several Dutch national newspapers, calling on First Vice President of the European Commission and Executive Vice President for the European Green Deal, Frans Timmermans, to take action. The letter was also literally put on display in front of the European Parliament and was widely discussed by online media as well as on radio and TV. A vegetarian brand bold enough to apply for a meat-promotion subsidy is bound to create a stir and make headlines. And indeed, it did.

We worked up to the specktacle in the week preceding the application but pushed for extra momentum on the day itself: The Vegetarian Butcher asked their followers to reply to their posts on Facebook and Instagram with a green check mark if they supported the idea. By now, the application has been submitted, and the plea for steak-containing subsidy distribution has been put on the map.

The appeal to Frans Timmermans took on a life of its own and it wasn’t long before #subsidiespecktakel became the number one topic in the Dutch media, as is evident from these articles on RTL Nieuws, Nu.nl, Metronieuws, Het Parool, Adformatie and RTL Z, for instance. Traditional media was intrigued as well, which was confirmed by exposure on TV shows such as WNL op Zondag, RTL Nieuws and NOS Journaal on NPO 1. Last but not least, a veritable tweetstorm erupted and many a discussion was set off. Mission accomplished! The campaign generated a media value of nearly € 400,000, created a positive attitude towards The Vegetarian Butcher’s Initiative and got the core message out to the general public.

If you would like to hear more about the ins and outs of our campaign strategy, don’t hesitate to contact us.