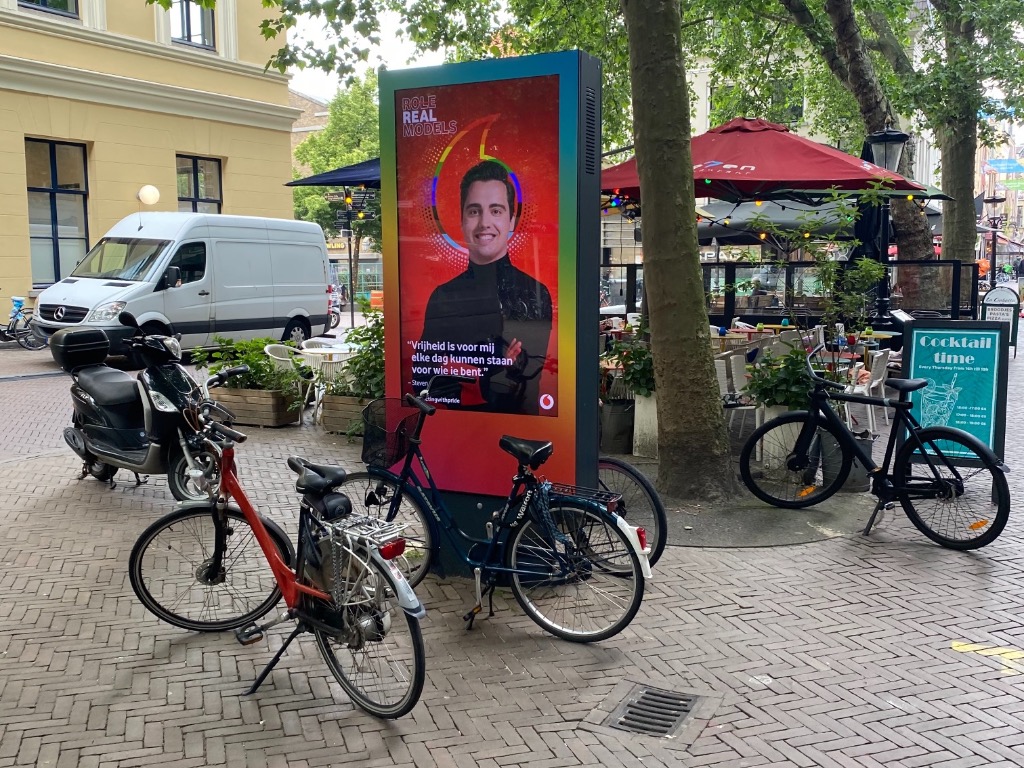 Being who you are, showing your true self and being proud of it; that is the purpose of Pride. Vodafone’s mission ties in with these sentiments; Vodafone the brand and VodafoneZiggo the employer actively strive for an inclusive society that gives people the space to be themselves. In its capacity of main sponsor of Utrecht Pride, Vodafone was looking for an overarching framework to put media and its technology to good use for ‘a better future’ for the LGBTQI+ community. That was a mission Glasnost was only too happy to help with. As the Utrecht Canal Pride was already on the horizon, it was all hands on deck to amplify and spread the message.V

The idea behind ‘a better future’ for the LGBTQI+ community is one of having and giving more people the freedom to be their true selves. Gen Z has the largest contingent of LGBTQI+ persons who have not been able to experience that feeling.  Young LGBTQI+ persons have a hard time forming their identities in our heteronormative society, as they feel they are different from their social circle in their very core. There are role models to be found on social media such as TikTok, but they are not well-represented in mainstream media or the larger public space. Most young people find their role models on mainstream media, so it is vitally important to accommodate a broad and relatable representation that is not built on stereotypes. We translated these views into a campaign that presents LGBTQI+ youths with realistic role models from their own social environment. These are role models that young persons can relate to and who give them a realistic and inclusive idea of individuals that are true to themselves.

To create a city of realistic role models in less than three weeks, we set up out-of-home screens throughout the city of Utrecht. The screens showed varied footage that brought the ‘Real Models’ campaign to life, both for and by the local LGBTQI+ community. To kick off the campaign, actual VodafoneZiggo employees were the first ‘real models’ to be presented on the screens; hundreds of visitors were added during Pride week in real time. The personalised campaign posters were projected on the screens in the city and in Vodafone shops. The activation was so successful that it didn’t take long for people to queue up en masse at photo booths at Central Station and in the city centre.

The message of freedom to be your true self spread outside the city of Utrecht when the concept was transferred to other Pride festivities–in Amsterdam and Groningen, for instance–as well as by the smart use of a social media campaign featuring ‘real models’. It’s fair to say that we managed to reach the younger LGBTQI+ audience in the whole of the Netherlands and more than fulfilled Vodafone’s rainbow-coloured objective